Home / About Us / Our Team / Kristie Gulley 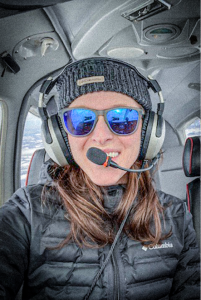 Kristie Gulley is the Lead Pilot for RiP Aviation. Her passion for aviation began early in life and has continued to grow, as she now instructs and guides aspiring pilots along their aviation journeys. For eight years, she was a mechanic in the repair and reclamation shop for KC-135 Stratotankers for the USAF. During her short career, she was fortunate to learn more than aircraft mechanics, she was given the opportunity to travel and experience things that many will only get to read about in books or magazines. During that time, she was able to also grow personally and realize her true calling in life is to pass on her love of aviation to others. She made the difficult decision to separate from the USAF after her application for a pilot slot was denied due to her age and continue her career on the civilian side. Since her separation, she has continued her education, earning CFI, CFII and MEI with her sights set on her sea plane rating in the near future. She was also given the opportunity to fly in the corporate world for a year, flying Cessna CJ3 and CJ4 jets, earning a full PIC, single pilot type rating, which may be her biggest achievement thus far! She currently divides her time between three local airports, instructing pilots from private pilot to CFI.